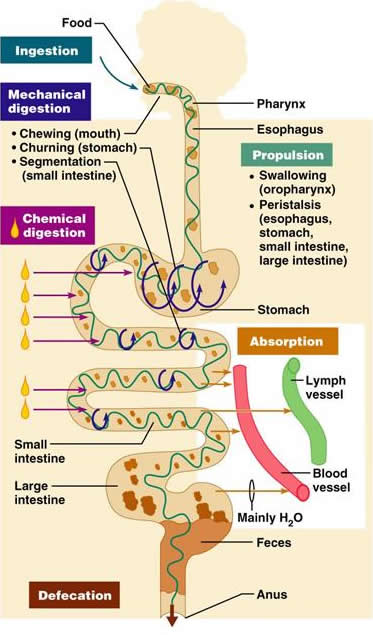 1.   Ingestion is the simple act of putting food into the mouth.

2.   Propulsion moves food through the alimentary canal and includes both swallowing and peristalsis.

3.   Mechanical digestion is the physical process of preparing the food for chemical digestion and involves chewing, mixing, churning, and segmentation.

4.   Chemical digestion is a series of catabolic steps in which complex food molecules are broken down to their chemical building blocks by enzymes.

5.   Absorption is the passage of digested end products from the lumen of the GI tract through the mucosal cells into the blood or lymph.

6.   Defecation eliminates indigestible substances from the body via the anus as feces.

To digest fats, after a meal the gallbladder contracts and discharges bile salts, which are made in the liver and stored in the gallbladder. The bile salts emulsify the fatty acids, enabling fat to be "dissolved" in water to be absorbed. During fat absorption the bile salts are reabsorbed and recirculated by the liver about six times daily. The bile salt-coated fat is able to travel through the water in the intestine to the intestinal cells in the last portion of the small intestine, the ileum, where it dissolves in the membranes of intestinal cells.

After absorption, lipids are repackaged with proteins as chylomicrons and sent to the liver. Here they are repackaged again in a coat of cholesterol and protein. This coating, which allows the fat to be dissolved in the blood, enables the fats to be transported to various parts of the body where fatty acids may be removed to provide energy for cellular components. The demands to make cholesterol by the liver for the coatings are greater for saturated fats than for polyunsaturated fats, which causes the former to contribute to higher blood cholesterol levels than the latter.

Digestion of both types of starch--amylose and amylopectin--is initiated by salivary amylase during chewing and is stopped by gastric acid in the stomach. Starch is further digested in the duodenum by pancreatic amylase to maltose and isomaltose. These branch chain components are broken down to glucose molecules by enzymes called maltases, located in the microvilli of the intestinal absorbing cell. At the same time, ingested sucrose is broken down by sucrase to glucose and fructose.

Similarly, lactose is broken down by lactase to glucose and galactose. Glucose and galactose are transported across the intestinal cell on a glucose carrier in combination with a sodium ion. In the cell interior, sodium is removed from the carrier and pumped out of the cell, leaving the sugar within the cell and freeing the carrier to repeat the process. The driving force from this sodium pump enables the cell to accumulate high quantities of glucose, while the amount in the intestine decreases as sugar is absorbed. This process is called active, or uphill, transport.

Fructose, released when sucrose is hydrolyzed, is absorbed by a diffusional process that is not energy dependent. Sugars exit the intestinal cell by diffusion into the capillaries to the blood circulation. Deficiency of one or more of the disaccharidases--most commonly lactase, which causes lactose intolerance--may occur. If it does, sugars remain undigested in the gut cavity and accumulate water, which leads to bloating and pain. In the colon, bacteria utilize the sugars to produce acid and gas, all contributing to diarrhea.

The bulk of the degradation products, the amino acids, are transported across the intestinal cell by a sodium-ion-dependent active process similar to that for glucose. For a short period in the newborn, absorption of ingested intact protein occurs by a process, called pinocytosis, in which the absorbing cell of the gut engulfs large peptide fragments. In some infants who are given cow's milk, the milk protein absorbed acts as a foreign protein, resulting in a hypersensitivity reaction, or milk allergy.

Some individuals lack a digestive enzyme that normally breaks down a wheat protein called gluten. This defect is known as celiac disease or sprue, in which undigested gluten may cause severe and chronic allergic response of the small intestine.

Absorption of calcium occurs mainly in the duodenum. Vitamin D facilitates calcium absorption as much as four times more than that in vitamin D deficiency states.

It is believed that a calcium-binding protein, which increases after vitamin D administration, binds calcium in the intestinal cell during absorption, followed by calcium transfer from blood circulation for storage in bone.

Approximately 5 to 10 liters (1.3 to 2.6 gal) of water, derived from food and drink as well as salivary, gastric, pancreatic, biliary, and intestinal secretions, circulate through the digestive tract daily. All but 500 ml (15 fl oz) are absorbed in the small intestine. Of the remainder, slightly more than half is absorbed in the colon.

Water transport in the small intestine occurs in response to osmotic gradients, that is, as the concentration of nutrients increases intracellularly during active transport, the osmotic pressure increases, causing an influx of water into the cell. Some electrolytes dissolved in this water enter the absorbing cell by "solvent drag."

The remaining electrolytes--bicarbonate, sodium, potassium, and chloride--are absorbed along the length of the small intestine by diffusion. In addition, some sodium enters the cell during active transport of sugars and amino acids.

Iron in food may exist primarily as inorganic (ferrous) iron and a smaller portion as ferric iron. After uptake by the intestinal cell, iron is stored as protein-bound ferric iron or eventually transferred from the cell.

Another source of dietary iron exists in the form of hemoglobin iron, which is hydrolyzed to heme and globin and then further degraded to release free ferrous iron.

Absorption of both these forms of iron is regulated by iron that preexists in body pools and in the intestine. When those sites are adequately filled, absorption is inhibited; if the store is deficient, uptake and transfer are augmented.

Fat-soluble vitamins are absorbed by the same mechanism described for the absorption of fat.

At present, it is believed that most of the water-soluble vitamin absorption occurs by diffusing across intestinal cells.

At least two water-soluble vitamins that are important in blood cell maturation are known to have specialized absorption mechanisms--vitamin B(12), as described above, and folic acid.