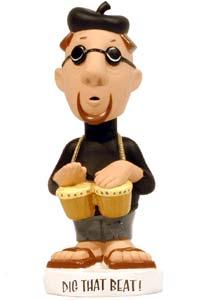 Why Poetry is Relevant

How do you hear a poem differently than when you read it to yourself?

Do you interpret a poem differently when you hear it than when you read it to yourself?

How can hearing a poem voiced by different people change its interpretation?

If you were to put a poem to music, what would it sound like?

If you were to illustrate a poem, what colors would you use?

"Poetry withers and dies out when it leaves music, or at least imagined music, too far behind it. Poets who are not interested in music are, or become, bad poets." (Ezra Pound - American Poet and Critic)

Starting in the 1950s, the Beat Generation rose to prominence in America, inspiring a culture of nonconformity and social revolution. Allen Ginsberg and Jack Kerouac were some of the more famous faces.  Beat movement, also called Beat Generation, American social and literary movement originating in the 1950s and centred in the bohemian artist communities of San Francisco’s North Beach, Los Angeles’ Venice West, and New York City’s Greenwich Village. Its adherents, self-styled as “beat” (originally meaning “weary,” but later also connoting a musical sense, a “beatific” spirituality, and other meanings) and derisively called “beatniks,” expressed their alienation from conventional, or “square,” society by adopting an almost uniform style of seedy dress, manners, and “hip” vocabulary borrowed from jazz musicians. Beat poets sought to liberate poetry from academic preciosity and bring it “back to the streets.” They read their poetry, sometimes to the accompaniment of progressive jazz.

At the time that the terms were coined, there was a trend amongst young college students to adopt the stereotype, with men wearing goatees and berets, rolling their own cigarettes, and playing bongos. Fashions for women included black leotards and wearing their hair long, straight, and unadorned in a rebellion against the middle class culture of beauty salons.

"Beat Generation" sold books, sold black turtleneck sweaters and bongos, berets and dark glasses, sold a way of life that seemed like dangerous fun—thus to be either condemned or imitated.

How to Analyze a Poem