My grandfather is 74 years old and has led a very active life. He has hiked in three countries, and as he has aged, still enjoys taking long walks and camping. He cannot carry a backpack any longer, but still likes to get out by himself without relying on someone else to carry his belongings for him.

Grandpa is 6' tall and is of average weight.  Grandpa uses a cane just as an extra support and to give him a little more confidence on long treks. But I noticed that he is starting to worry more about whether he should continue to hike since he can't do everything by himself.  He fears that he may get lost at some point while in the woods and not be able to find his way back or reach someone for help. He likes to listen to music, and also is a wildlife photographer. He used to carry a few cameras with him on hikes, but this is no longer possible as he is not as strong as he used to be.

On a perfect hike, Grandpa would plan on walking for about two hours, resting with some lunch, and then returning. It is a long day but with certain provisions and perhaps some assistance, he should be able to enjoy a safe hike by himself.

My teacher says that new technology can offer powerful tools for helping loved ones lead safer, fuller lives.  We learned about engineers and what kinds of jobs they do.  There are engineers who create all kinds of assistive devices and adpative sports equipment for people with disabilities.  I started to look around and I noticed that a lot of students in my class have casts from various injuries.  One girl is using a scooter, another uses crutches.  And one student in my class who has a lot of health problems wears a wireless, mobile PERS (personal emergency response) device in case something happens while he is away from home and he needs immediate medical assistance.   They all share the same problem as grandpa!  They need to get around with their "stuff"and it's hard to do when you can't or don't want to rely on someone to help you.  And sometimes you might need help in a hurry where you least expect it.

MS-ETS1-2 Evaluate competing design solutions using a systematic process to determine how well they meet the criteria and constraints of the problem.

MS-ETS1-3. Analyze data from tests to determine similarities and differences among several design solutions to identify the best characteristics of each that
can be combined into a new solution to better meet the criteria for success.

HS-ETS1-2.Design a solution to a complex real-world problem by breaking it down into smaller, more manageable problems that can be solved through
engineering.

Standards for Technological Literacy - All Ages
The Nature of Technology

Standard 1: Students will develop an understanding of the characteristics and scope of technology.

Standard 3: Students will develop an understanding of the relationships among technologies and the connections between technology and other fields of study.

Standard 4: Students will develop an understanding of the cultural, social, economic, and political effects of technology.

Standard 6: Students will develop an understanding of the role of society in the development and use of technology.

Standard 7: Students will develop an understanding of the influence of technology on history.

Design
Standard 8: Students will develop an understanding of the attributes of design.

Standard 9: Students will develop an understanding of engineering design.

Standard 10: Students will develop an understanding of the role of troubleshooting, research and development, invention and innovation, and
experimentation in problem solving.

Abilities for a Technological World
Standard 11: Students will develop abilities to apply the design process.

Standard 13: Students will develop abilities to assess the impact of products and systems.

The Designed World
Standard 14: Students will develop an understanding of and be able to select and use medical technologies.

How has technology and engineering improved the day to day lives of people or animals living with physical challenges?  Could I develop a solution for my grandfather's situation? What modifications would be the most innovative and helpful change? What is the best device to accomodate all his needs?   What modification will enable someone to carry all this?  Could my design be useful to real people?  Are there other assistive devices that could be improved through reengineering?  How do I make a prototype of a design?  What could I design to prevent him from getting lost?

What is your hypothesis?  What are your variables?  What is your problem?  Brainstorm with your group.  What will your device look like?  Now build a prototype.

Congratulations! You are a team of engineers who have been given an assignment to work with a client to develop a new assistive device to meet their needs. You'll start with the standard assistive device and re-engineer it with additional devices and features to meet a client's specific needs. Likely the resulting device will be useful to a broader population as well, and could be marketed to others and become a profitable product for the company you work for. You'll need to develop a construction budget for your new cane so that the client can consider the cost of the new device. Sometimes engineers will develop prototypes and test a new design before moving into a broad manufacturing and marketing scheme.

Assistive devices are used to help people with disabilities at various stages of life. Someone may break a leg and need crutches for mobility until their leg heals, or an elderly person may not have confidence in walking and need the support of a sturdy walker to maintain balance and to be able to walk with confidence.

Many are not designed as assistive devices for people with disabilities, but to make life easier for anyone--for instance, a sound sensitive light switch. In the kitchen, eating and cooking utensils can be fitted with oversized handles for easier gripping. This "assistive device" can enable an 85 year old with arthritic fingers and hands to continue to prepare meals for themselves.

Another kitchen-related assistive device is an automatic feeder, controlled by a chin switch or and hand/foot switch, so that people who cannot hold eating utensils due to tremor or spasticity of the hands and arms can feed themselves.

Assistive devices are frequently found in the bathroom. Grab bars around the tub are easily installed and help prevent falls. Shower benches, bathtub lifts and a door on the bathtub not only alleviate some need for human assistance, but make it easier to shower and reduce the risk of slipping.

In the bedroom, guard rails around the bed can make it easier and safer get in and out of bed. Bedside controls for lights and other appliances increase the ability of mobility impaired people to control the lighting, temperature or other conditions of their home without getting out of bed.

For the functionally impaired elderly living in multi-level housing, wheelchair lifts and stair-climbs allow for full access and mobility throughout the house. Individuals with hearing impairments can benefit from a simple blinking light instead of a doorbell. Large handled combs and brushes and velcro fasteners for clothing help people with limited manual fine motor abilities. 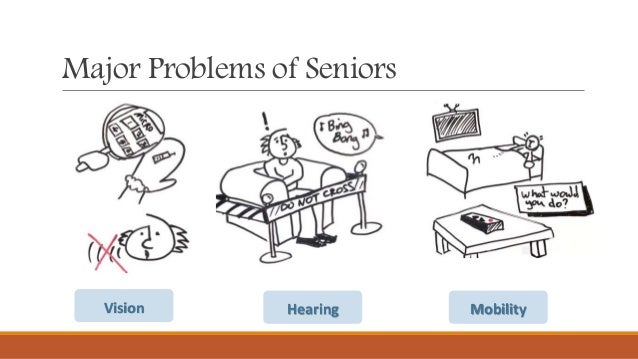 A cane can serve several different functions to meet the needs of a user: it can aid in balance, it can support a weakened or painful limb or joint, and it can aid in sensing the environment. There are many types of canes, and they often are designed to meet the needs of a specific population of people. For example, "white canes" are designed to assist the visually impaired. They are longer and thinner and allow the user to "feel" the path ahead. They also alert others, such as motorists, to know the user is blind and therefore use caution. In the United Kingdom, red banding on a white cane indicates a deaf-blind user.

There are many types of canes, from basic wooden designs that can be manufactured inexpensively, to more technologically advanced devices. Basic types include folding canes that may have several joints and are usually connected by an internal elastic cord, quad canes that have four legs at the base so they can stand on their own and can be more stable, tripod canes which open in tripod fashion and sometimes include a seat for resting, adjustable canes that can be made shorter or taller to meet the height of the user, canes with straps so they cannot fall away from the user, lighted canes that help a user in dark places, and even some equipped with a buzzer or doorbell device that can alert others that the user needs help. For use on ice, there are metallic cleats that can be used to help the user stay safe when walking on slippery surfaces. And, there are many different handles available to match the size of the user's hands and their medical needs.

The materials selected for manufacturing a cane can be determined by many factors including the strength, weight, and durability required. For example, an aluminum cane would be much lighter than one made of steel. This might be preferred by an elderly person without much strength in their arms.

Bergstein, B. (2015, May-June). Paralyzed again: We have the technology to dramatically increase the independence of people with spinal-cord injuries. The problem is bringing it to market--and keeping it there. Technology Review [Cambridge, Mass.], 118(3), 56+.

Piazza, S. (2013). These 'bots are made for walking: patients with disabilities are learning to regain skills with the assistance of smart machines. American Scientist, 101(5), 346+.