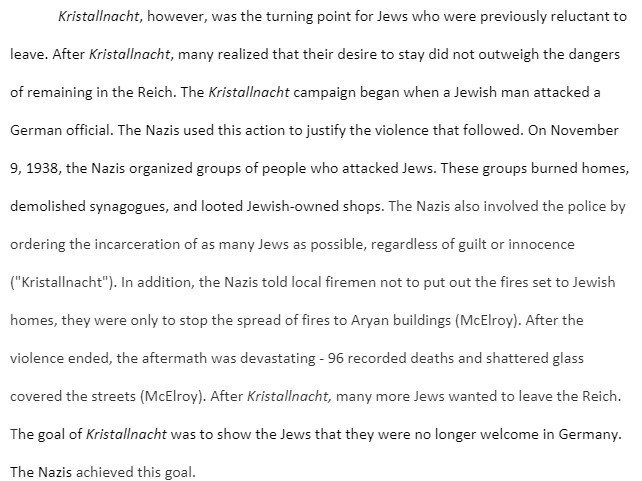 "I have not yet begun to fight" (Jones).

Imperialism is “the practice, the theory, and the attitudes of a dominating metropolitan center ruling a distant territory” (Said 9).

According to Edward W. Said, imperialism is defined by “the practice, the theory, and the attitudes of a dominating metropolitan center ruling a distant territory” (9).

After any paraphrased sentence(s).

Zenia Malecki resisted in both armed and unarmed ways.  She continued to practice her religion and preserve her culture through living each day.  She also smuggled pieces of rifles and participate in the organized resistance group (Gurewitsch 259).

Include a page number, if possible.

For a source with three or more authors,

List only the first author’s last name, and replace the additional names with et al.

In-text citations for print sources with no known author

When a source has no known author, use a shortened title of the work instead of an author name. Place the title in quotation marks if it's a short work (such as an article) or italicize it if it's a longer work (e.g. plays, books, television shows, entire Web sites) and provide a page number.

"They are venturesome, courageous girls who travel here and there across Poland to cities and towns, carrying Aryan papers which describe them as Polish or Ukrainian" ("The Girl Couriers").